Home  »  Cooking Questions   »   What Happens When You Overfill a Pressure Cooker? 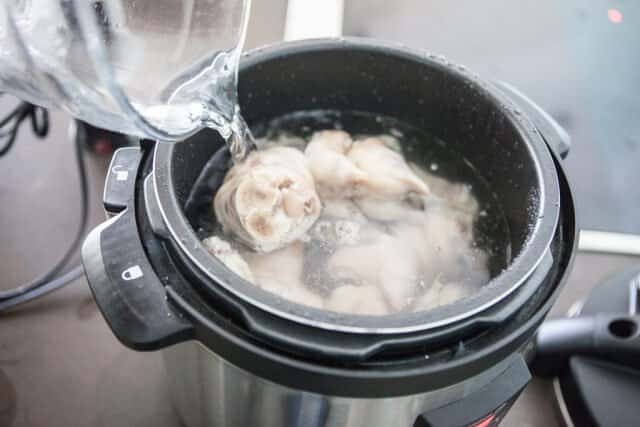 To start off this post lets watch a funny video of a guy who filled his pressure cooker too full. If this doesn’t illustrate what happens when you overfill a pressure cooker then I don’t know what does.

What’s a pressure cooker and how does it work?

Common uses involving pressure cookers include softening viands such as meat and fish, processing liquid like broths and sauces and the technique called braising which is a characteristic of many dishes. There are many reasons why a pressure cooker is used but the main reason is that it speeds up the cooking process.

Most pressure cookers have a standard liquid boiling point of 121 degrees Celsius. As mentioned, this increased temperature in the vessel and the higher than average boiling point of the liquid causes the food to cook much faster. Estimates range from a third of the average cooking time to a fifth.

As discussed above, pressure cookers work by using the steam built up inside the enclosed vessel to cook the food and liquid within in a rate much faster than would normally be. Before we get to the maximum amount of pressure these devices can hold, let us first discuss the settings of a pressure cooker in terms of the unit of measurement of pressure, pounds per square inch (psi).

When you set your pressure cooker to 10 psi, this means that every square inch inside the vessel is experiencing about ten pounds of pressure in the form of expanding particles. The higher the pressure, the faster the particles expand and consequently, more heat is able to penetrate the surface of the liquid or meat.

The role of liquids

One cannot use a pressure cooker without using liquid since the liquid emits steam that helps increase the temperature inside the vessel.

The amount of liquid put inside the pressure cooker thus depends on two things; the food being cooked and the size of the food. A common rule of thumb for loosely-packed foods such as rice, grains, beans, fruits and vegetables is that these take 1 cup of water for 100 grams. Meats and poultry on the other hand take at least 2 cups for every 100 grams.

Of course these measurements can vary depending on the recipe and style of cooking that is stated.

One of the things that could happen when a overfilling a pressure cooker with liquid is that the food loses its taste and texture. This happens because the glut of liquid produces too much pressure which then breaks the food down so much that it loses its flavor. This can be compared to boiling meat for so long that it turns into a pulp. As a result, the flavor is then transferred to the liquid itself but since there is so much liquid, it still would not taste any better.

Secondly, and more dangerously, the pressure cooker lid can detach and fly off directly above the pot a pace similar to a cork flying off a champagne bottle. This is caused by the amount of pressure built up inside the pressure cooker. You might be wondering why the vessel itself would not explode like a bomb. This reaction is the result of the pressure cracking down on the weakest point in the pot, which is the separation between the lip of the vessel and the lid. Thus, pressure causes these two items to separate from each other.