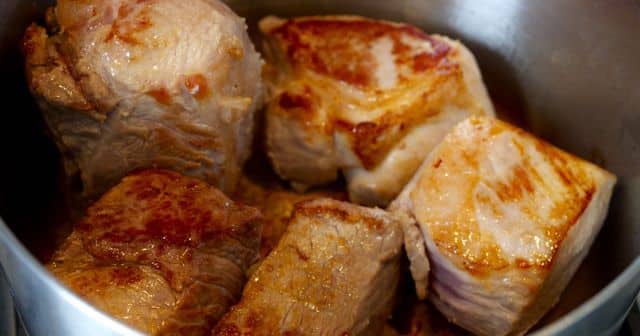 Brown meat is perhaps the most distinct indicator that food has been cooked and is ready to eat. The visual stimulus the color brown projects tell the customer that the meal is not under nor overcooked. Moreover, the browning of the meat gives off a delicious smell that again signifies that the meat is ready to be eaten.

How and why does meat turn brown in the first place?

The browning of meats is basically a chemical reaction. All meats contain a protein called myoglobin. The content of myoglobin is significantly higher in the case of red meats. Myoglobin is a protein that stores oxygen in the muscle cells of animals. Of course, our bodies also contain myoglobin because our muscles need oxygen for continuous usage for daily activities.

Now you might be wondering how myoglobin contributes to the process of browning meat. Well, going back to chemistry class, myoglobin is referred to as a compound or an entity made up of two or more elements. For example, another compound is water which is made up of oxygen and hydrogen.

In the case of myoglobin, it is made up of Hydrogen, Oxygen, Carbon and iron. The darkening effect occurs when the meat is exposed to heat at the base of a pressure cooker, pan, or grill which allows it to lose some of the oxygen compounds in the atoms. As mentioned, red meat contains plenty of myoglobin and consequently, plenty of iron. When red meat is cooked, it browns more significantly since the amount of oxygen lost is much greater compared to white meat.

Interestingly, meats are not the only foods that turn brown when cooked. This effect has also been observed in other foods that do not contain myoglobin. This effect is called the Maillard reaction.

This chemical reaction was first coined by French chemist Louise Camille Maillard in his attempt to reproduce biological protein synthesis.

A chemical reaction between amino acids and reducing sugars occur which turns the food brown. The reaction is a more subtle, but the same type, of reaction as in caramelization and pyrolysis. For the effect to take place, temperatures of over 140 to 165 degrees Celsius are necessary for the browning of such foods.

Here is a video on the reaction.

The Maillard reaction can be observed in many foods besides meat such as breads (toast and pretzels), French fries, vegetables, coffee and milk.

It is also through the Maillard reaction that the flavor of the food begins to change, and taste better. This is the result of the reaction producing a multitude of complex molecules which make up the delicious flavor and aromas of the food.

Too much of a good thing becomes bad and the same can be said of browning too much food. Cooking above 180 degrees Celsius causes the chemical reaction to happen too quickly and striking the balance to achieve all those complex molecules are lost. As a result, the food is burned and this process is referred to as pyrolysis.

Pressure cooking and the Maillard reaction

As discussed, pressure cookers are able to generate the temperatures to trigger the Maillard reaction. Let’s take a closer look at what happens to the meat when pressure cooked.

At 120 degrees Celsius, the liquid in the container begins to emit steam which is then pushed into the meat. As pressure and heat continue to build up in the vessel, the temperature escalates to the point that all liquid has evaporated and the pressure cooker is essentially an oven. This allows the inside of the meat to be thoroughly cooked.

Once the temperature in the pressure cooker reaches around 140 degrees Celsius, the Maillard reaction occurs and this will start browning the surface of the meat.

Of course, one should be careful as not to overcook the meat or else pyrolysis will occur. Refer to the following article to read up on how to safely depressurize the pressure cooker and cooking an enticing meal for you and your guests.